Tales of the Lovecraft Mythos (Paperback) 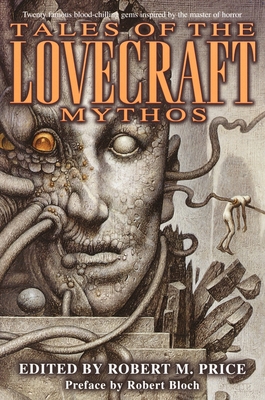 When H. P. Lovecraft first introduced his macabre universe in the pages of Weird Tales magazine, the response was electrifying. Gifted writers—among them his closest peers—added sinister new elements to the fear-drenched landscape. Here are some of the most famous original stories from the pulp era that played a pivotal role in reflecting the master’s dark vision.

FANE OF THE BLACK PHARAOH by Robert Bloch: A man obsessed with unearthing dark secrets succumbs to the lure of the forbidden.
BELLS OF HORROR by Henry Kuttner: Infernal chimes ring the promise of dementia and mutilation.
THE FIRE OF ASSHURBANIPAL by Robert E. Howard: In the burning Afghan desert, a young American unleashes an ancient curse.
THE ABYSS by Robert A. W. Lowndes: A hypnotized man finds himself in an alternate universe, trapped on a high wire between life and death.

THE THING ON THE ROOF by Robert E. Howard
THE SEVEN GEASES by Clark Ashton Smith
THE INVADERS by Henry Kuttner
THE THING THAT WALKED ON THE WIND by August Derleth
ITHAQUA by August Derleth
THE LAIR OF THE STAR-SPAWN by August Derleth & Mark Schorer
THE LORD OF ILLUSION by E. Hoffmann Price
THE WARDER OF KNOWLEDGE by Richard F. Searight
THE SCOURGE OF B’MOTH by Bertram Russell
THE HOUSE OF THE WORM by Mearle Prout
SPAWN OF THE GREEN ABYSS by C. Hall Thompson
THE GUARDIAN OF THE BOOK by Henry Hasse
MUSIC OF THE STARS by Duane W. Rimel
THE AQUARIUM by Carl Jacobi
THE HORROR OUT OF LOVECRAFT by Donald A. Wollheim
TO ARKHAM AND THE STARS by Fritz Leiber