The Imperial Cruise: A Secret History of Empire and War (Paperback) 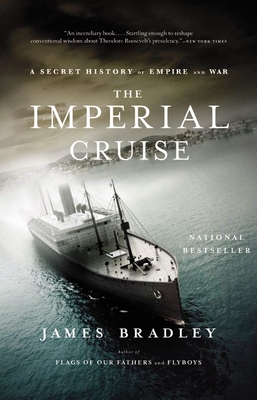 In 2005, a century later, James Bradley traveled in the wake of Roosevelt's mission and discovered what had transpired in Honolulu, Tokyo, Manila, Beijing and Seoul.

In 1905, Roosevelt was bully-confident and made secret agreements that he though would secure America's westward push into the Pacific. Instead, he lit the long fuse on the Asian firecrackers that would singe America's hands for a century.

James Bradley is the author of the New York Times bestsellers The Imperial Cruise, Flyboys, and Flags of Our Fathers, and a son of one of the men who raised the American flag on Iwo Jima.

PRAISE FOR THE IMPERIAL CRUISE:

"A provocative study...What is fascinating about Bradley's reconstruction of a largely neglected aspect of Roosevelt's legacy is the impact that his racial theories and his obsession with personal and national virility had on his diplomacy. Engrossing and revelatory, The Imperial Cruise is revisionist history at its best."—Ronald Steel, New York Times Book Review

"For readers under the impression that history is the story of good guys and bad guys...this book could be useful medicine."—USA Today