Where White Men Fear to Tread: The Autobiography of Russell Means (Paperback) 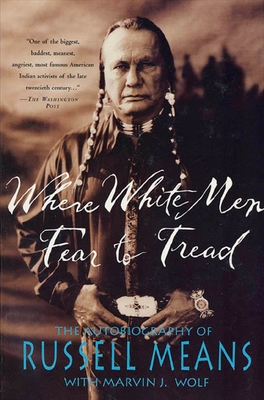 Russell Means was the most controversial American Indian leader of our time. Where White Men Fear to Tread is the well-detailed, first-hand story of his life, in which he did everything possible to dramatize and justify the American Indian aim of self-determination, such as storming Mount Rushmore, seizing Plymouth Rock, running for President in 1988, and--most notoriously--leading a 71-day takeover of Wounded Knee, South Dakota, in 1973.

This visionary autobiography by one of our most magnetic personalities will fascinate, educate, and inspire. As Dee Brown has written, "A reading of Means's story is essential for any clear understanding of American Indians during the last half of the twentieth century."

Russell Means (1939-2012), was a renowned political activist for the rights of American Indian people in the United States, Central and South America, and internationally through the United Nations.

Born an Oglala/Lakota, he was raised on the Pine Ridge Indian Reservation near the Black Hills, and then in Vallejo, California. He also appeared frequently on television programs and series, as well as alongside Daniel Day Lewis in the film The Last of the Mohicans.

Toward the end of his life, Means divided his time between Chinle, Navajo Nation, Arizona, and Porcupine, North Dakota, among an extended family that included seven children, thirty-three grandchildren, and thirty great-grandchildren.

Marvin J. Wolf is an award-winning writer and member of the American Society of Journalists and Authors. He has more than fifteen books, authored and coauthored, to his name, including the bestsellers Fallen Angels (true crime) and Where White Men Fear to Tread: The Autobiography of Russell Means. Wolf is also a veteran of the Vietnam War with a Bronze Star, an Air Medal, and a Purple Heart. He lives in Los Angeles.

“It's impossible to stop reading [Mean's] gripping autobiography . . . Few readers will leave the book without feeling profoundly altered by the authenticity of Mean's story. It's American history--warts, wounds, and all.” —San Francisco Chronicle Book Review

“Mean's tale gives one a visceral understanding of today's Indians, their ancestors, and the many betrayals they have suffered.” —Chicago Tribune

“Not since war chiefs such as Geronimo or Crazy Horse has an Indian leader so polarized the American public as Russell Means.” —Dallas Morning News

“One of the biggest, baddest, meanest, angriest, most famous American Indian activists of the late twentieth century.” —The Washington Post