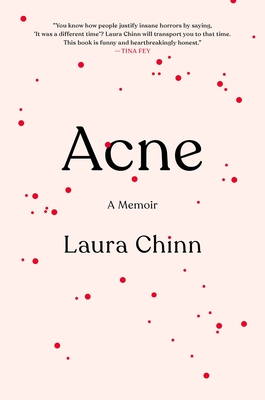 From the creator and star of Florida Girls comes a hilarious and profound memoir about family, happiness, and really aggressive acne.

Despite having dirty-blonde hair and fair skin, Laura Chinn is mixed-race: the daughter of a Black father and a white mother, which on its own makes for some funny and insightful looks at identity. Laura’s parents were both Scientologists and nonconformists in myriad ways. They divorced early in Laura’s childhood, and she spent her teen years ping-ponging back and forth between Clearwater, Florida, and Los Angeles (with an extended stint in Tijuana for good measure).

Laura lived alone and raised herself for long periods of time, but don’t worry! Her mom’s alcoholic boyfriend was always nearby to supervise. She also lost family members to horrific tragedies, started drinking alcohol and smoking cigarettes when she was eleven years old, and dropped out of school when she was fifteen, all the while completely obsessed with and scarred by her severe acne condition.

This is not a sad story. There is Jell-O wrestling. There is an abnormal amount of dancing. There is information about whether you can drink gallons of sangria while taking unregulated Accutane acquired in Mexico. But mostly there is love, and ultimately there is redemption. Laura explores her trauma through anecdotes riddled with grit and humor, proving that in the face of unspeakable tragedy, it is possible to find success, love, and self-acceptance, zits and all.

Laura Chinn has been writing television for a decade on several shows including The Mick and Children's Hospital. As an actor, she has appeared in a wide range of movies and TV shows such as Grey's Anatomy, My Name is Earl, Happy Endings and Warrior. She also created and starred in Florida Girls on Pop TV. She currently lives in Los Angeles where she performs improv and tries to learn how to surf every summer.

“You know how people justify insane horrors by saying, ‘It was a different time’? Laura Chinn will transport you to that time. This book is funny and heartbreakingly honest.”—Tina Fey

"Brutally honest, hilarious and horrifying. Reading this book was like whispering late-night secrets with a long-lost best friend."—Jenny Lawson

“Chinn’s artistry, weaving the juxtaposition of devastating heartbreak and hilarious self-awareness, is masterful. If you are drawn to a sorrowful weep and snort laugh--this book is for you.”—Jessica Alba

"Acne feels like watching a gut-wrenching but hilarious show. Acne is really good, but it ain’t pretty."

“Chinn shares deeply personal stories that will make you inappropriately laugh out loud until you are in tears. There also will be times when you will not be able to stop the real tears from flowing in this heart-touching story of self-love and perseverance.”
—Kym Whitley

“As someone who’s known Laura and would beg for more stories of her adolescence, I knew her memoir would be wickedly hilarious. What I was not expecting was to burst into tears while reading it on a very quiet airplane. I laughed and wept my way through Acne as fast as I could to see what could possibly happen next. Laura’s unfathomably bizarre life is beautifully told in the most delightful and heart-wrenching way, ultimately leaving me full of gratitude and hope. And a much greater understanding of all of those Florida stereotypes.”
—Kaitlin Olson

"Laura Chinn upholds the maxim 'the road of excess leads to the palace of wisdom' in her refreshingly honest and incredibly funny autobiography. I couldn't put it down."—Woody Harrelson

"Laura Chinn is a modern-day Tennessee Williams but funnier and more dramatic. Acne is a consistently jaw-dropping, laugh out loud, 'wait hold on, let me reread that part again' book."
—Paul Scheer

"A natural-born storyteller, Chinn writes with humor and heart about the emotional burden of living with a conspicuous skin condition, the challenges of being a mixed-race person who appears white, and the tragedies her family endures. Readers will be rooting for her to find clear skin and happiness."—Booklist Starred Review

"...rivals the likes of Samantha Irby and Casey Wilson... If tragedy plus time equals comedy, then this book has that formula perfected. Chinn’s memoir is surreal in its reality, offering a completely unique perspective of healing, both of the epidermis and the core. ...This off-the-wall, borderline manic romp through unstable relationships and warped priorities is unlike most any other memoir headed for the shelves."—Library Journal Starred Review

“...an engaging and touching journey that’s sure to resonate.”—Buzzfeed

“This hilarious memoir is by and about a woman who has suffered from a terrible case of self-esteem-crushing cystic acne her entire life. But it’s also about so much more than that. It’s about growing up mixed-race in a broken home where things just seem to get worse and worse. It’s about making it through each day in spite of multiple obstacles, and weathering the fallout from multiple tragedies. It’s about how, through it all, Chinn maintains her sense of humor, continuing to push forward until, by the end, she finds a sort of redemption.”—Bookriot

“A moving tale of childhood trauma, love, and determination”—Oprah Daily

"Through her very funny, very honest prose, she works her way away from cleansing, toning, and despairing, and toward living."—Glamour Magazine

“Chinn’s story, equal parts funny and poignant, explores how a young woman forges her identity and learns to accept herself – and others – in a world that tells her there’s nowhere she belongs.”—Orange County Register

"... Chinn (creator and star of the criminally underrated sitcom Florida Girls) deftly imparts her stories with such wit that they’re never maudlin. Acne delivers on the awkwardness that its name implies in more ways than one."—BUST Magazine