Jurassic West, Second Edition: The Dinosaurs of the Morrison Formation and Their World (Life of the Past) (Hardcover) 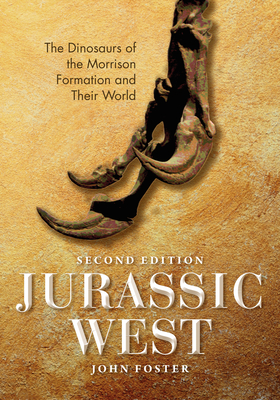 The famous bone beds of the Morrison Formation, formed one hundred and fifty million years ago and running from Wyoming down through the red rock region of the American Southwest, have yielded one of the most complete pictures of any ancient vertebrate ecosystem in the world. Jurassic West, Second Edition tells the story of the life of this ancient world as scientists have so far been able to reconstruct it.

Aimed at the general reader, Jurassic West, Second Edition recounts the discovery of many important Late Jurassic dinosaurs such as Apatosaurus, Allosaurus, and Stegosaurus. But dinosaurs compose barely a third of the more than 90 types of vertebrates known from the formation, which include crocodiles and turtles, frogs and salamanders, dinosaurs and mammals, clams and snails, and ginkgoes, ferns, and conifers.

Featuring nearly all new illustrations, the second edition of this classic work includes new taxa named since 2007, updates to the naming and classifications of some old taxa, and expanded sections on numerous aspects of Morrison Formation paleontology and geology.

John Foster is a paleontologist at the Utah Field House of Natural History State Park Museum in Vernal, Utah. He has conducted fieldwork and research in the Morrison Formation throughout the Rocky Mountain region for 30 years, starting while a graduate student at the South Dakota School of Mines and Technology and the University of Colorado, Boulder. He previously worked as executive director of the Moab Museum in Moab, Utah, and curator of paleontology at the Museums of Western Colorado in Fruita, Colorado. He is also author of Cambrian Ocean World: Ancient Sea Life of North America.