Daughter of the Empire State: The Life of Judge Jane Bolin (Hardcover) 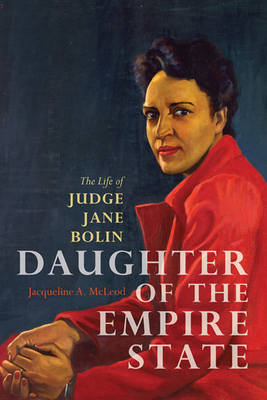 This long overdue biography of the nation's first African American woman judge elevates Jane Matilda Bolin to her rightful place in American history as an activist, integrationist, jurist, and outspoken public figure in the political and professional milieu of New York City before the onset of the modern Civil Rights movement.

Bolin was appointed to New York City's domestic relations court in 1939 for the first of four ten-year terms. When she retired in 1978, her career had extended well beyond the courtroom. Drawing on archival materials as well as a meeting with Bolin in 2002, historian Jacqueline A. McLeod reveals how Bolin parlayed her judicial position to impact significant reforms of the legal and social service system in New York.

Beginning with Bolin's childhood and educational experiences at Wellesley and Yale, Daughter of the Empire State chronicles Bolin's relatively quick rise through the ranks of a profession that routinely excluded both women and African Americans. Deftly situating Bolin's experiences within the history of black women lawyers and the historical context of high-achieving black New Englanders, McLeod offers a multi-layered analysis of black women's professionalization in a segregated America.

Linking Bolin's activist leanings and integrationist zeal to her involvement in the NAACP, McLeod analyzes Bolin's involvement at the local level as well as her tenure on the organization's national board of directors. An outspoken critic of the discriminatory practices of New York City's probation department and juvenile placement facilities, Bolin also co-founded, with Eleanor Roosevelt, the Wiltwyck School for boys in upstate New York and campaigned to transform the Domestic Relations Court with her judicial colleagues. McLeod's careful and highly readable account of these accomplishments inscribes Bolin onto the roster of important social reformers and early civil rights trailblazers.

Jacqueline A. McLeod is a professor of history and Africana studies at Metropolitan State University of Denver and coeditor of Crossing Boundaries: Comparative History of Blacks in Diaspora.

"Jacqueline A. McLeod not only premieres the public life of Jane Matilda Bolin but also bridges some of the gaps that exist in studies of lawyers who are most likely to be male and of female lawyers who are most likely to be white. This is an engaging work that will be of interest to scholars of women's history and African American history as well as legal studies and the history of social and political reform."--Stephanie J. Shaw, author of What a Woman Ought to Be and to Do: Black Professional Women Workers During the Jim Crow Era

"McLeod draws on archival material and an interview with Bolin to rescue from obscurity this juvenile-justice activist and pioneer in the advancement of African Americans and women in the legal profession."--Booklist

"Daughter of the Empire State accomplishes what any good first biography should do."--The Journal of American History


“McLeod has recaptured the career of a remarkable individual and breathed new life into the memory of a pioneering figure deserving far greater recognition than she has traditionally received.”--New York History

"This seminal work makes informative data about Jane Matilda Bolin available to the academic and general reading public. Jacqueline A. McLeod moves Bolin from the local court to the national scene where her accomplishments as a judge and outstanding advocate for children will become more widely known."--Wilma King, author of Stolen Childhood: Slave Youth in Nineteenth-Century America