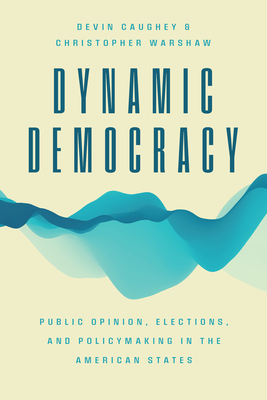 A new perspective on policy responsiveness in American government.

Scholars of American politics have long been skeptical of ordinary citizens’ capacity to influence, let alone control, their governments. Drawing on over eight decades of state-level evidence on public opinion, elections, and policymaking, Devin Caughey and Christopher Warshaw pose a powerful challenge to this pessimistic view. Their research reveals that although American democracy cannot be taken for granted, state policymaking is far more responsive to citizens’ demands than skeptics claim.

Although governments respond sluggishly in the short term, over the long term, electoral incentives induce state parties and politicians—and ultimately policymaking—to adapt to voters’ preferences. The authors take an empirical and theoretical approach that allows them to assess democracy as a dynamic process. Their evidence across states and over time gives them new leverage to assess relevant outcomes and trends, including the evolution of mass partisanship, mass ideology, and the relationship between partisanship and ideology since the mid-twentieth century; the nationalization of state-level politics; the mechanisms through which voters hold incumbents accountable; the performance of moderate candidates relative to extreme candidates; and the quality of state-level democracy today relative to state-level democracy in other periods.

Devin Caughey is associate professor of political science at the Massachusetts Institute of Technology. He is the author of The Unsolid South.

Named one of "The Best Scholarly Books of 2022":
"It is easy to be pessimistic about American democracy. Elected officials appear far more interested in scoring partisan points than crafting policy that represents their constituents...Dynamic Democracy presents a powerful, data-drenched rejoinder to this line of thinking. The authors argue that, at the state level, policy has been surprisingly reflective of public preferences. Slowly but surely, as voters’ preferences change, so too have the policies of the states in which they live. In the typically staid field of quantitative American politics, Caughey and Warshaw have written a book that speaks to urgent concerns about the state of our democracy."
— The Chronicle of Higher Education

“Dynamic Democracy is a tour de force. It puts forth the most ambitious assessment in a generation of the health of democracy in the American states. Built on an unprecedented wealth of data and using a sweeping and sophisticated empirical approach, Dynamic Democracy examines how institutions, especially political parties and elections, mediate the complex interplay between state governments and the public. It provides an optimistic yet clear-eyed appraisal: state policies reflect remarkable responsiveness to public opinion over the long term, though important gaps remain.”
— Elisabeth R. Gerber, University of Michigan

“Caughey and Warshaw have revolutionized the study of public opinion and state politics, and Dynamic Democracy is their magnum opus. The book carefully and rigorously traces the trends in and relationships between opinion and policy in the states—the institutional level that in recent decades has moved from the periphery to the center of American politics. Using cutting-edge statistical tools, Caughey and Warshaw uncover new evidence that over the long term, state governments do indeed respond to the attitudes of their constituents. Dynamic Democracy is a must-read for scholars of state politics and public opinion, or anyone interested in systematic quantitative analysis of American politics.”
— Jacob M. Grumbach, University of Washington

“Justice Brandeis advanced the idea of states as laboratories in 1932. But only with this landmark book have political scientists made good on the promise of elucidating democracy via the states. Harnessing new methods, Caughey and Warshaw provide a decisive portrait of the dynamics of policymaking and public opinion. Eventually, state policies come to align with public opinion, a hallmark of democratic governance. But statehouse democracy has faced potent threats: from Jim Crow exclusion, malapportionment, and gerrymandering. Comprehensive and transformative.”
— Daniel J. Hopkins, University of Pennsylvania

“Dynamic Democracy is a marvelous analysis of how public opinion can translate into policy in the American states. For this task, Caughey and Warshaw collect massive amounts of data on the ideological directions of state electorates, state-level politicians, and state policies. They put it together to tell a causal story with easy-to-understand statistical analyses. Best of all is their use of the time dimension, showing how the process of democratic representation works better than you might think but often moves slowly.”
— Robert S. Erikson, Columbia University