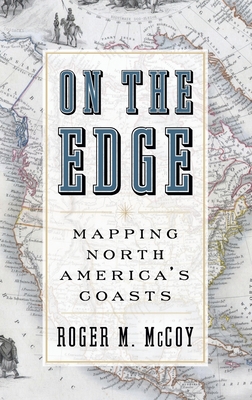 With our access to Google Maps, Global Positioning Systems, and Atlases that cover all regions and terrains and tell us precisely how to get from one place to another, we tend to forget there was ever a time when the world was unknown and uncharted--a mystery waiting to be solved. In On the Edge, Roger McCoy tells the captivating--and often harrowing--story of the 400 year effort to map North America's Coasts. Much of the book is based on the narratives of mariners who sought a passage through the continent to Asia and produced maps as a byproduct of their journeys. These courageous explorers had to rely on the most rudimentary mapping tools and to contend with unimaginably harsh conditions: ship-crushing ice floes; the threat of frostbite, scurvy, and starvation; gold fever and mutiny; ice that could lock them in for months on end; and, inevitably, the failure to find the elusive Northwest passage. Telling the story from the explorers' perspective, McCoy allows readers to see how maps of their voyages were made and why they were so full of errors, as well as how they gradually acquired greater accuracy, especially after the longitude problem was solved. On the Edge tracks the dramatic voyages of John Cabot, John Davis, Captain Cook, Henry Hudson, Martin
Frobisher, John Franklin (who nearly starved to death and become known in England as "the man who ate his boots"), and others, concluding with Robert Peary, Otto Sverdrup, and Vihjalmur Steffanson in the early twentieth century. Drawing upon diaries, journals, and other primary sources--and including a set of maps charting the progress of exploration over time--On the Edge shows exactly how we came to know the shape of our continent.