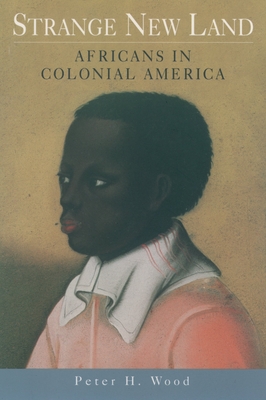 Engaging and accessibly written, Strange New Land explores the history of slavery and the struggle for freedom before the United States became a nation. Beginning with the colonization of North America, Peter Wood documents the transformation of slavery from a brutal form of indentured servitude to a full-blown system of racial domination. Strange New Land focuses on how Africans survived this brutal process--and ultimately shaped the contours of American racial slavery through numerous means, including:
- Mastering English and making it their own
- Converting to Christianity and transforming the religion
- Holding fast to Islam or combining their spiritual beliefs with the faith of their masters
- Recalling skills and beliefs, dances and stories from the Old World, which provided a key element in their triumphant story of survival
- Listening to talk of liberty and freedom, of the rights of man and embracing it as a fundamental right--even petitioning colonial administrators and insisting on that right. Against the troubling backdrop of American slavery, Strange New Land surveys black social and cultural life, superbly illustrating how such a diverse group of people from the shores of West and Central Africa became a community in North America.

Peter H. Wood is a professor of history at Duke University. Dr. Wood is the author of Black Majority: Negroes in Colonial South Carolina from 1670 through the Stono Rebellion, which was nominated for the National Book Award. He is the coauthor of Created Equal: A Social and Political History of the United States and Natives and Newcomers: The Way We Lived in North Carolina Before 1770.