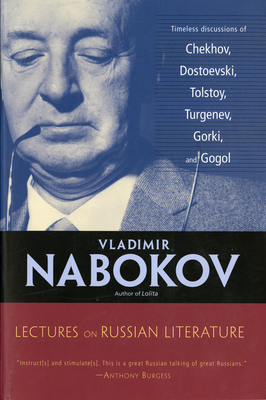 The acclaimed author presents his unique insights into the works of great Russian authors including Tolstoy, Dostoevsky, Gogol, Gorky, and Chekhov.

In the 1940s, when Vladimir Nabokov first embarked on his academic career in the United States, he brought with him hundreds of original lectures on the authors he most admired. For two decades those lectures served as the basis for Nabokov’s teaching, first at Wellesley and then at Cornell, as he introduced undergraduates to the delights of great fiction.

This volume collects Nabokov’s famous lectures on nineteenth-century Russian literature, with analysis and commentary on Nikolay Gogol’s Dead Souls and “The Overcoat”; Ivan Turgenev’s Fathers and Sons; Maxim Gorky’s “On the Rafts”; Leo Tolstoy’s Anna Karenina and The Death of Ivan Ilych; two short stories and a play by Anton Chekhov; and several works by Fyodor Dostoevsky, including Crime and Punishment, The Idiot, and The Possessed.

This volume also includes Nabokov’s lectures on the art of translation, the nature of Russian censorship, and other topics. Featured throughout the volume are photographic reproductions of Nabokov’s original notes.

“This volume . . . never once fails to instruct and stimulate. This is a great Russian talking of great Russians.”—Anthony Burgess

Vladimir Nabokov (1899-1977), Russian-born poet, novelist, literary critic, translator, and essayist was awarded the National Medal for Literature for his life's work in 1973. He taught literature at Wellesley, Stanford, Cornell, and Harvard. He is the author of many works including Lolita, Pale Fire, Ada, and Speak, Memory.