On the Trail of the Serpent: The Epic Hunt for the Bikini Killer (Paperback) 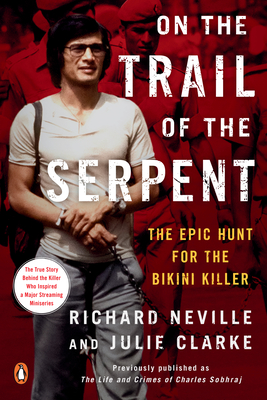 The complete story of Charles Sobhraj, the serial killer who inspired the hit Netflix series The Serpent.

Charles Sobhraj remains one of the world's great conmen, and as a serial killer, the story of his life and capture endures as legend. Born in Vietnam to a Vietnamese mother and Indian father, Sobhraj grew up deprived of a sense of identity, moving to France before being imprisoned and stripped of his multiple nationalities. Driven to floating from country to country, continent to continent, he became the consummate con artist, stealing passports, smuggling drugs and guns across Asia, busting out of prisons and robbing wealthy associates. But as his situation grew more perilous, he turned to murder, preying on Western tourists dropping out across the 1970s "hippie trail," leaving dead bodies and gruesome crime scenes in his wake, triggering an international manhunt that put him at the top of INTERPOL's most wanted list.

On the Trail of the Serpent draws its readers into the story of Sobhraj's life as told exclusively to journalists Richard Neville and Julie Clarke by the investigators, families of the victims, and even Sobhraj himself. Blurring the boundaries between true crime and novelization, this remains the definitive book about Sobhraj--a riveting tale of sex, drugs, adventure, and murder.

Richard Neville was an Australian writer and commentator who first came to prominence as the editor of the counterculture magazine OZ. Having travelled the 'pot trail' throughout the 1960s and 70s, Neville and his partner Julie Clarke were commissioned by Random House to write the story of con man and serial killer, Charles Sobhraj. The result, On the Trail of the Serpent was a global bestseller. His other books include Play Power; Hippie, Hippie, Shake; Out of My Mind and Amerika Pyscho. Neville died in 2016.

Julie Clarke trained as a journalist on the Sydney Telegraph before joining ABC television. She later became a New York correspondent for Australian Consolidated Press and worked as a TV producer. She was commissioned to write On the Trail of the Serpent along with her partner Richard Neville, an endeavor that took the pair all over the world for three years.