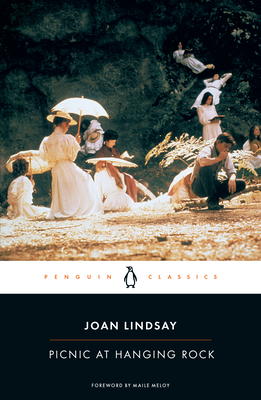 A 50th-anniversary edition of the landmark novel about three “gone girls” that inspired the acclaimed 1975 film, featuring a foreword by Maile Meloy, author of Do Not Become Alarmed

It was a cloudless summer day in the year 1900. Everyone at Appleyard College for Young Ladies agreed it was just right for a picnic at Hanging Rock. After lunch, a group of three girls climbed into the blaze of the afternoon sun, pressing on through the scrub into the shadows of the secluded volcanic outcropping. Farther, higher, until at last they disappeared. They never returned. . . .

Joan Lindsay was born Joan à Beckett Weigall in Melbourne, Australia, in 1896. She attended Clyde Girls Grammar School, the model for Appleyard College in Picnic at Hanging Rock, and the National Gallery of Victoria Art School, where she studied painting. On Valentine’s Day 1922 she married Daryl Lindsay in London. She chose Valentine’s Day 1900 as the setting for Picnic at Hanging Rock, her best-known work, which was first published in 1967 and is the basis for the 1975 film of the same name by Peter Weir. She died in Melbourne in 1984.

Maile Meloy (foreword) is the author of the novels Do Not Become Alarmed, Liars and Saints, and A Family Daughter; the story collections Half in Love and Both Ways Is the Only Way I Want It (named one of the 10 Best Books of the Year by The New York Times Book Review); and the Apothecary series, a middle-grade trilogy. She has received The Paris Review’s Aga Khan Prize, the PEN/Malamud Award, the American Academy of Arts and Letters’ Rosenthal Award, and a Guggenheim Fellowship. She lives in Los Angeles.

“[This] cult novel—the first in a thriving genre of ‘gone girls’—continues to beguile . . . and will continue to haunt readers for generations to come.” —The Economist

“Pure magic. Every fashion film and NYU undergraduate thesis takes its cues from this lyrical masterpiece. In college I tried to make a satirical remake entitled Lunchtime at Dangling Boulder, but all my actors slept too late.” —Lena Dunham, on the film adaptation

“[From the] Victorian hothouse atmosphere and fetishism . . . and its focus on the burgeoning sexual curiosity of the girls (and the women) . . . to Gothic terrors, supernatural wonder, divine mysticism, or the imperialist unconscious . . . Picnic actively encourages a host of fantasies.” —Megan Abbott, author of You Will Know Me, The Fever, and Dare Me, in an essay for The Criterion Collection’s Blu-ray/DVD edition of the film

“A sinister tale . . . laced with touches of other-worldliness” —The Guardian

“The fact that most people believed that this palpable fiction was a record of a real event is not merely a tribute to the writer . . . but a testimony to the atavistic power of its theme.” —The Spectator