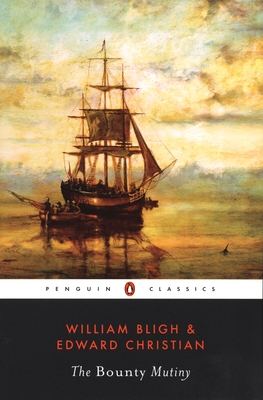 The names William Bligh, Fletcher Christian, and the Bounty have excited the popular imagination for more than two hundred years. The story of this famous mutiny has many beginnings and many endings but they all intersect on an April morning in 1789 near the island known today as Tonga. That morning, William Bligh and eighteen surly seamen were expelled from the Bounty and began what would be the greatest open-boat voyage in history, sailing some 4,000 miles to safety in Timor. The mutineers led by Fletcher Christian sailed off into a mystery that has never been entirely resolved.

While the full story of what drove the men to revolt or what really transpired during the struggle may never be known, Penguin Classics has brought together-for the first time in one volume-all the relevant texts and documents related to a drama that has fascinated generations. Here is the full text of Bligh's Narrative of the Mutiny, the minutes of the court proceedings gathered by Edward Christian in an effort to clear his brother's name, and the highly polemic correspondence between Bligh and Christian-all amplified by Robert Madison's illuminating Introduction and rich selection of subsequent Bounty narratives.

William Bligh was born near Plymouth, England, in 1754. His sailing career began in 1762, when, at the age of seven, he was entered on the books of the Monmouth as captain's servant. In 1787, he was given command of an expedition to transplant breadfruit plants from Tahiti to the West Indies aboard the Bounty. The mutiny that took place on the voyage has excited the popular imagination for more than 200 years, and his account of it, The Bounty Mutiny, is published by Penguin Classics.

Edward Christian, brother of mutineer Fletcher Christian, was born in 1758 near Cockermouth in the Lake District. The counsel for William and Dorothy Wordsworth in their famous suit against James Lowther, he became chief justice of the Isle of Ely and professor of law at Cambridge. He died in 1823.

R. D. Madison is an author, an editor, and a teacher. He served as a professor of English at the US Naval Academy in Annapolis, Maryland, and has edited several volumes of military and naval history, including William Bligh and Edward Christian’s The Bounty Mutiny.