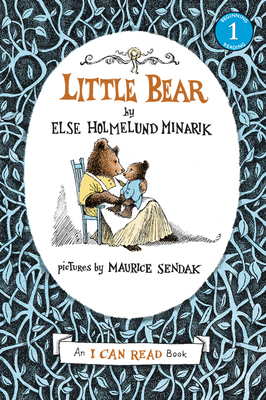 Celebrate the timeless warmth of a mother's love with the very first ever I Can Read book!

Meet Little Bear, a friend to millions of children. And meet Mother Bear, who is there whenever Little Bear needs her. When it is cold and snowy outside, she finds just the right outfit for Little Bear to play in. When he goes to the moon, she has a hot lunch waiting for him on his return. And, of course, she never forgets his birthday.

This classic from Else Holmelund Minarik and Maurice Sendak was written in 1957 and remains as beloved today as it was then.

An ALA Notable Children's Book, this Level One I Can Read is full of warm and lovingly playful stories that are perfect for children learning to sound out words and sentences. Whether shared at home or in a classroom, the short sentences, familiar words, and simple concepts of Level One books support success for children eager to start reading on their own.

Else Holmelund Minarik first introduced readers to her timeless character in the classic Little Bear. Publication of this book, with illustrations by Maurice Sendak, launched the I Can Read series. This much-loved author continues to write stories for children at her home in North Carolina.

Maurice Sendak’s children’s books have sold over 30 million copies and have been translated into more than 40 languages. He received the 1964 Caldecott Medal for Where the Wild Things Are and is the creator of such classics as In the Night Kitchen, Outside Over There, Higglety Pigglety Pop!, and Nutshell Library. In 1970 he received the international Hans Christian Andersen Medal for Illustration, in 1983 he received the Laura Ingalls Wilder Award from the American Library Association, and in 1996 he received a National Medal of Arts in recognition of his contribution to the arts in America. In 2003, Sendak received the first Astrid Lindgren Memorial Award, an annual international prize for children’s literature established by the Swedish government.