I'll Take Your Questions Now: What I Saw at the Trump White House (Hardcover) 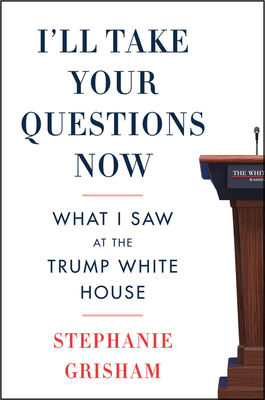 “Grisham’s book shows considerably more humility and self-reflection than that of any other Trump administration veteran I’ve read (and I’ve pretty much read them all).” -- Laura Miller, Slate

“Salacious and score-settling.” --The Guardian

Stephanie Grisham rose from being a junior press wrangler on the Trump campaign in 2016 to assuming top positions in the administration as White House press secretary and communications director, while at the same time acting as First Lady Melania Trump’s communications director and eventually chief of staff. Few members of the Trump inner circle served longer or were as close to the first family as Stephanie Grisham, and few have her unique insight into the turbulent four years of the administration, especially the personalities behind the headlines.

I’ll Take Your Questions Now is a White House memoir like no other, written by someone no longer bound by the codes of spin, denial, and twisted loyalty that the Trump administration imposed on all its members. Here is a brutally honest, frequently funny, and always perceptive look behind the scenes of a White House that was in turmoil from day one.

After an early stint in the White House press office, Grisham moved to the East Wing to work for First Lady Melania Trump. This introduced Grisham to a whole new perspective on Trump World, and she soon became a devoted adviser to the first lady, privy to Melania Trump’s most candid thoughts on every imaginable topic and noteworthy events: Jared and Ivanka, Stormy Daniels, the first lady’s infamous jacket that read “I Really Don’t Care, Do U?” and much more.

Grisham’s work for the first lady would lead to her appointment as the White House press secretary in 2019. As one of the few figures in the Trump White House to last all four years, Grisham shares her unfiltered view of the whole experience—from the early days when she was seduced by the glamour and power of Trump World to her quickly ascending career in a frequently toxic, dog-eat-dog workplace, to the pinnacles of her profession, where she soon faced the harshest lessons of flying too close to the sun.

Grisham’s memoir is also a personal reckoning from someone who was a true believer, tracing her dawning awareness of how the administration began to lose sight of its mission—serving the people—in its constant battles with the press and other politicians and, above all, in the unending internal drama that consumed a rowdy cast of advisers, Jared Kushner and Ivanka Trump, and the president and first lady themselves. It is a story that ends in tragedy with the events of January 6, 2021, the day on which Grisham was the first administration official to quit, a long-overdue severing of ties with the people who had brought her to the job of a lifetime but at enormous cost. It is an account in which Grisham spares no one, not even herself.

I’ll Take Your Questions Now is not just about politics or the White House. It is about loyalty and family, learning and screwing up, proud moments and monumental regrets, narcissism and humility, love and heartbreak, friendships and loss, and, of course, falling down and trying your damnedest to get back up.

“Grisham’s book shows considerably more humility and self-reflection than that of any other Trump administration veteran I’ve read (and I’ve pretty much read them all).” — Laura Miller, Slate

“Salacious and score-settling.” — The Guardian