The Brides of Maracoor: A Novel (Another Day #1) (Paperback) 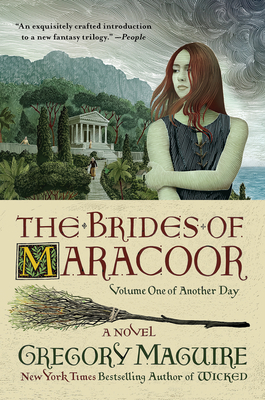 “An exquisitely crafted introduction to a new fantasy trilogy.” — People

Over a decade ago, Gregory Maguire wrapped up the series he began with Wicked by giving us the fourth and final volume of the Wicked Years, his elegiac Out of Oz.

But “out of Oz” isn’t “gone for good.” Maguire’s new series, Another Day, is here, twenty-five years after Wicked first flew into our lives.

Volume one, The Brides of Maracoor, finds Elphaba’s granddaughter, Rain, washing ashore on a foreign island. Comatose from crashing into the sea, Rain is taken in by a community of single women committed to obscure devotional practices.

As the mainland of Maracoor sustains an assault by a foreign navy, the island’s civil-servant overseer struggles to understand how an alien arriving on the shores of Maracoor could threaten the stability and wellbeing of an entire nation. Is it myth or magic at work, for good or for ill?

The trilogy Another Day follows this green-skinned girl from the island outpost into the unmapped badlands of Maracoor before she learns how, and becomes ready, to turn her broom homeward, back to her family and her lover, back to Oz, which—in its beauty, suffering, mystery, injustice, and possibility—reminds us all too clearly of the troubled yet sacred terrain of our own lives.

Gregory Maguire is the New York Times bestselling author of The Brides of Maracoor; The Oracle of Maracoor; A Wild Winter Swan; Hiddensee; After Alice; Confessions of an Ugly Stepsister; Lost; Mirror Mirror; and the Wicked Years, a series that includes Wicked—the beloved classic that is the basis for the blockbuster Tony Award–winning Broadway musical of the same name—Son of a Witch, A Lion Among Men, and Out of Oz. He lives with his family in New England.

“A decade after she flew Out of Oz in Maguire’s Wicked series, Elphaba’s granddaughter crash-lands on an island inhabited by seven sacrificial virgins. The arrival of the green-skinned teen (and her talking goose) upends their enclave. An exquisitely crafted introduction to a new fantasy trilogy.” — People

“Fans will look forward to reading more about the interaction of Oz, Rain and the strange society of Maracoor.” — Wall Street Journal

“Wonderful attention to detail. . . . [Maguire] does excellent character work. . . . The larger world of Maracoor Abiding . . . has echoes of Greek mythology and looks to be fertile ground as a setting for more books. An expertly crafted introduction to a new series of magic and adventure.” — Kirkus Reviews (starred review)

“With its rich character development and a healthy dash of Maguire’s humor, this latest Oz tale is as satisfying a read as the Wicked Years quartet.” — Buzzfeed

“[A] complex, enticing fantasy. . . . Maguire cleverly teases out the characters’ motivation and desires, turning what at first appears to be a straightforward tale into a gripping page-turner. Fans will revel in this triumphant return to the world of Wicked.” — Publishers Weekly

“Sharp and wry, funny and pointed, [Maguire] writes in Brides with a certainty and a sort of world-sized elegance, creating something new from scraps of the cloth he worked for years. He remains a master of a specific sense of intimacy amid scale, able to craft precise moments of fallibility, of humans picking our way through our lives, against the fate of nations and the endless sea.” — Tor.com

“Maguire’s work is melodic, symphonic and beautiful; it is dejected and biting and brave. . . . In fabulous details and self-mocking language, Maguire displays his gift for whimsical portrayals of the broken, the powerless, the hopeless, the bad.” — Los Angeles Times on A Lion Among Men

“[A] masterwork…. Concludes…one of the most audacious and successful fantasy series of the past few decades…. Hilarious, heart-wrenching and extremely poignant…. The greatest fantasy series make one want to read them again. That’s what I intend to do with this one.” — Washington Post on Out of Oz

“In four books, Maguire has expanded the mythology of Oz from L. Frank Baum’s books and created a land that’s just as rich as Middle-earth or Narnia, and balances the serious with the sublime. . . . Out of Oz is a satisfying finish to the Wicked Years saga.”  — USA Today on Out of Oz