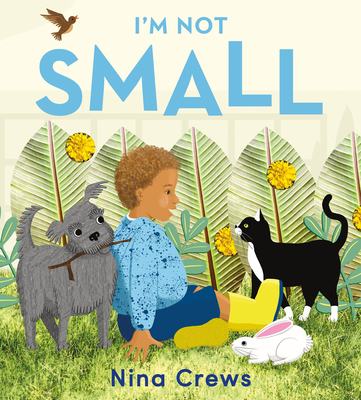 What makes you big? What makes you small? From acclaimed author-illustrator Nina Crews comes a picture book that introduces young children to the concepts of size and comparisons. A great choice for emerging readers, school classrooms, and storytime sharing.

Time to play outside! It’s easy for a young boy to feel small in a world that is made up of big, big things. But when he takes a closer look, he discovers that he is big, too. His dog is smaller than he is, and his cat is smaller than his dog. And the teeny-tiny ant crawling through the grass? Even smaller!

I’m Not Small will spark family and classroom conversations about the concepts of size and size comparisons, about growing up, about feeling seen, and about observing the world around you. Playful text and bright, detailed illustrations also make it easy to learn about comparing and categorizing objects. A must-have for fans of Anna Kang and Christopher Weyant’s You Are (Not) Small.

Nina Crews drew inspiration from her own neighborhood in creating the artwork for both this book and its celebrated companion, The Neighborhood Mother Goose. She lives with her family in Brooklyn, New York.

Nina Crews drew inspiration from her own neighborhood in creating the artwork for both this book and its celebrated companion, The Neighborhood Mother Goose. She lives with her family in Brooklyn, New York.

“A child greets the day with excitement, eager to go play outside. . . . But once out the door, the youngster feels—and looks, in the vast illustration featuring tall trees and open skies—very small. . . . Subsequent encounters with diminutive creatures (cat, bunny, birds, insects) remind the child that big and small are relative; that it’s possible to be both at once; and, in a warmhearted twist ending, that each has its own merits. . . . Completely relatable for all viewers, big or small.” — Horn Book (starred review)

“Charming . . . Encouraged by his clearly loving parents, who proclaim him a big kid, [a young boy] goes out to the yard on his own. At first, he feels small compared to the sky, the trees, and the backyard. Then, he finds that he is bigger than many things: his dog and cat, his rabbit, a scary bee . . . When he is lifted inside by his mother, the narrator is happy to still be small. . . . Crews captures the joy of early childhood exploration in a book that adults and children can both enjoy.”  — Booklist (starred review)

“Asa . . . is a big kid now—he’s going outside to play by himself for the first time. Only, everything outside is so big! . . . His quiet contemplation of all things in nature is both soothing and inspiring . . . Crews’s textured and collaged illustrations create a sense of nostalgia and whimsy, especially at the end when we can all relate as Asa remembers he enjoys being a little kid again. This is a nice addition to story hours about relativity, size comparisons, and schoolyard science lessons.” — School Library Journal

“[A] child encounters his family’s backyard alone in this experiential exploration of relative size. . . . Despite his newfound autonomy, though, he quickly notices that his stature is small . . . A second turnabout occurs on subsequent pages, which show the child’s comparative size against the family’s pets—a dog, cat, and rabbit—and diminutive birds and insects . . . Crews renders her story of a kid finding his place in a variably sized world through vividly sketched, textural digital collage whose lens zooms in and out to portray moments of adventure, exploration, and safety in the wide world.” — Publishers Weekly