The Happiest Girl in the World: A Novel (Paperback) 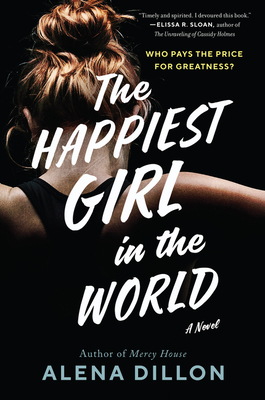 “Propulsive, transfixing, and disturbing. I could not set the book down. Harrowing and fearlessly honest, The Happiest Girl in the World is a haunting read because it couldn't have done justice to its subjects – fictional and real – any other way.” —Popsugar

One of Good Morning America's Best Books of April!

For Sera Wheeler, the Olympics is the reason for everything. It’s why she trains thirty hours a week, starves herself to under 100 pounds, and pops Advil like Tic Tacs.

For her mother, Charlene,  hungry for glory she never had, it’s why she rises before dawn to drive Sera to practice in a different state, and why the family scrimps, saves, and fractures. It’s why, when Sera’s best friend reports the gymnastics doctor to the authority who selects the Olympic Team, Sera denies what she knows about his treatments, thus preserving favor.

Their friendship shatters. But Sera protected her dream—didn’t she?

Sera doubles down, taping broken toes, numbing torn muscles, and pouring her family’s resources into the sport. Soon she isn’t training for the love of gymnastics. She’s training to make her disloyalty worthwhile. No matter the cost.

The Happiest Girl in the World explores the dark history behind an athlete who stands on the world stage, biting gold. It's about the silence required of the exceptional, a tarnished friendship, and the sacrifices a parent will make for a child, even as a family is torn apart. It’s about the price of greatness.

Alena Dillon is the author of Mercy House, which is in development as a CBS All Access television series. Her work has appeared in publications including LitHub, River Teeth, Slice Magazine, The Rumpus, and Bustle. She teaches creative writing and lives on the north shore of Boston with her husband, son, and dog.

"A brilliant and often heartbreaking account of a young girl striving to live a complicated dream, The Happiest Girl In The World probes the tragedy of the at-all-costs mentality that fuels Olympic performances." — Blythe Lawrence, co-author of Aly Raisman’s Fierce: How Competing For Myself Changed Everything

"Happiest Girl in the World is a searing look at elite gymnastics and the lengths an athlete will go to reach her goal. Dillon writes a harrowing story about how hope can be saddled with burdens, and sacrifice can wear down the soul. Timely and spirited, I devoured this book." — Elissa R. Sloan, author of The Unraveling of Cassidy Holmes

"The Happiest Girl in the World is a tender reflection on the importance of second chances, the ways in which both courage and cowardice can break a person, and what it takes to make yourself whole again." — Meghan MacLean Weir, author of The Book of Essie

“Propulsive, transfixing, and disturbing. I could not set the book down. Harrowing and fearlessly honest, The Happiest Girl in the World is a haunting read because it couldn't have done justice to its subjects — fictional and real — any other way.” — Popsugar

"As she did with the Catholic Church in Mercy House, Dillon lays bare the sins of the U.S. gymnastic world and all those who enable this sport... Dillon sticks the landing with this layered book about abuse, drive, family expectations, and trauma." — Library Journal (starred review)

"Whether readers can name every Olympian gymnast from the past 40 years or can't tell a Yurchenko from a Mustafina, Dillon's latest novel will enthrall. A natural next read for fans of Hannah Orenstein's Head over Heels (2020) or the Netflix documentary Athlete A." — Booklist (starred review)

“A life-altering debut featuring fierce, funny, and irreverent women who battle the most powerful institution in the world. This is the book we’ve all been waiting for.”
— Amy Schumer

"Never underestimate the power of a group of women. Fierce, thoughtful, and dramatic--this is a story of true courage." — Susan Wiggs, New York Times bestselling author

“In Mercy House, Alena Dillon gives us one of fiction’s more unlikely lovable heroines: elderly, dynamic Sister Evelyn, whose tale—and that of her housemates—is as unexpected as it is moving. This is a thoughtful, accomplished debut.” — Therese Ann Fowler, New York Times bestselling author of Z, A Well-Behaved Woman, and A Good Neighborhood

“[A] stirring, fiery debut...Dillon balances her protagonist’s righteous anger with an earnest exploration of Evie’s faith and devotion to justice and community service. This uncompromising story will light up book clubs.” — Publishers Weekly