The Year That Broke America: An Immigration Crisis, a Terrorist Conspiracy, the Summer of Survivor, a Ridiculous Fake Billionaire, a Fight for Florida, and the 537 Votes That Changed Everything (Hardcover) 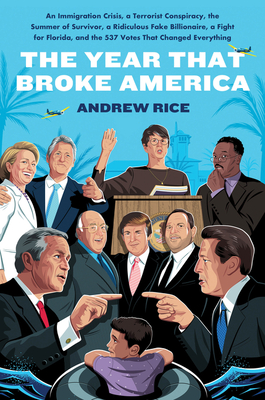 “In his beautifully crafted and rigorously reported volume, Andrew Rice takes readers back to Florida in 2000, laying out a cultural and political history of a moment at which America’s political system was turned inside out, its power structures upended. The Year That Broke America is vivid and wide-ranging; it also happens to be a page turner.”—Rebecca Traister, bestselling author of Good and Mad

“Engrossing, insightful, tragic and above all, irresistible.”— Ronald Brownstein

Combining the compelling insight of Nixonland and the narrative verve of Ladies and Gentleman: The Bronx is Burning, a journalist’s definitive cultural and political history of the fatefully important moment when American politics and culture turned: the year 2000.

Before there was Coronavirus, before there was the contentious 2020 election or the entire Trump presidency, there was a turning-point year that proved momentous and transformative for American politics and the fate of the nation. That year was 2000, the last year of America’s unchallenged geopolitical dominance, the year Mark Burnett created Survivor and a new form of celebrity, the year a little Cuban immigrant became the focus of a media circus, the year Donald Trump flirted with running for President (and failed miserably), the year a group of Al Qaeda operatives traveled to America to learn to fly planes. They all converged in Florida, where that fall, the most important presidential election in generations was decided by the slimmest margin imaginable.

But the year 2000 was also the moment when the authority of the political system was undermined by technical malfunctions;  when the legal system was compromised by the justices of the Supreme Court; when the financial system was devalued by deregulation, speculation, creative securitization, and scam artistry; when the mainstream news media was destabilized by the propaganda power of Fox News and the supercharged speed of the internet; when the power of tastemakers, gatekeepers, and cultural elites was diminished by a dawning recognition of its irrelevance.

Expertly synthesizing many hours of interviews, court records, FOIA requests, and original archival research, Andrew Rice marshals an impressive cast of dupes, schmucks, superstars, politicians, and shameless scoundrels in telling the fascinating story of this portentous year that marked a cultural watershed. Back at the start of the new millennium it was easy to laugh and roll our eyes about the crazy events in Florida in the year 2000—but what happened then and there has determined where we are and who we’ve become.

Andrew Rice is a contributing editor at New York magazine and the author of THE TEETH MAY SMILE BUT THE HEART DOES NOT FORGET (Metropolitan).  He is a former staff writer at The Hill and The Observer and was a cub political reporter in the year 2000.

"In his beautifully crafted and rigorously reported volume, Andrew Rice takes readers back to Florida in 2000, laying out a cultural and political history of a moment at which America's political system was turned inside out, its power structures upended. The Year That Broke America is vivid and wide-ranging; it also happens to be a page turner."   — Rebecca Traister, bestselling author of Good and Mad.

“In this masterful work of storytelling that’s as entertaining as it is illuminating, Andrew Rice, an astute and relentless reporter, has retraced the intersections of politics, finance, pop culture and media at the turn of the century to create a rich, pulsing narrative filled with portents, signs, ironies, comedies of error and revelatory new discoveries. By dropping us back into the frothy, decadent whirl of the year 2000 Rice is describing a world we thought we knew—but didn’t. And it’s a world we’ve been living in ever since." — Joe Hagan, Author of Sticky Fingers: The Life and Times of Jann Wenner and Rolling Stone Magazine

“Andrew Rice's panoramic history of America in the year 2000 is engrossing, insightful, tragic and above all, irresistible. From the 9/11 plotters and coke-fueled titans of Wall Street, to the battle for the White House and the first buffoonish political pretensions of a certain New York City real estate developer, Rice's keen eye has captured America in full at a moment of critical transition. With a novelist's pacing and an utterly gripping cast of characters, he persuasively traces many of our current discontents to the enthusiasms, antagonisms, and sheer oddities of America at the dawn of the new Millennium.” — Ronald Brownstein

“Journalist Rice offers a fast-paced and jam-packed political and cultural history of America in the year 2000. . . . Pointing out that Florida was where some of the 9/11 hijackers learned to fly, where Donald Trump first planned to run for president, and where the controversy over Elián Gonzalez’s immigration case played out, Rice characterizes the state as the “crucible” from which 21st-century America emerged. . . . Impressively sourced and energetically written, this is a rollicking account of how the country got to where it is today.”  — Publishers Weekly

“What comes into focus through Rice’s eclectic collection of Florida Man tales is a prehistory of the Darkest Timeline—the one we’re living today. Out of that cauldron emerged a witch’s brew of American carnage we maybe should have seen coming.” — Los Angeles Times