Death at Greenway: A Novel (Hardcover) 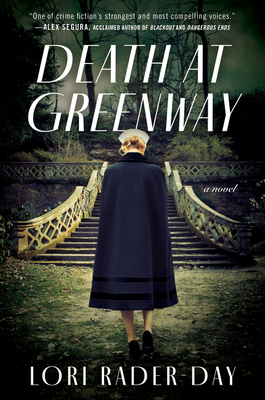 “Two women nurses escape wartime London to care for children evacuated to Greenway, the country home of Agatha Christie. But all is not idyllic, with murders, a disappearance, and seemingly healthy men dying in the nearby village. A mystery Mrs. Christie would have approved of.”
— Jane Simons, The Dog Eared Book, Palmyra, NY

"Irresistible... a Golden Age homage, an elegantly constructed mystery that on every page reinforces the message that everyone counts." –New York Times Book Review

From the award-winning author of The Day I Died and The Lucky One, a captivating suspense novel about nurses during World War II who come to Agatha Christie’s holiday estate to care for evacuated children, but when a body is discovered nearby, the idyllic setting becomes host to a deadly mystery.

Bridey Kelly has come to Greenway House—the beloved holiday home of Agatha Christie—in disgrace. A terrible mistake at St. Prisca’s Hospital in London has led to her dismissal as a nurse trainee, and her only chance for redemption is a position in the countryside caring for children evacuated to safety from the Blitz.

Greenway is a beautiful home full of riddles: wondrous curios not to be touched, restrictions on rooms not to be entered, and a generous library, filled with books about murder. The biggest mystery might be the other nurse, Gigi, who is like no one Bridey has ever met. Chasing ten young children through the winding paths of the estate grounds might have soothed Bridey’s anxieties and grief—if Greenway were not situated so near the English Channel and the rising aggressions of the war.

When a body washes ashore near the estate, Bridey is horrified to realize this is not a victim of war, but of a brutal killing. As the local villagers look among themselves, Bridey and Gigi discover they each harbor dangerous secrets about what has led them to Greenway. With a mystery writer’s home as their unsettling backdrop, the young women must unravel the truth before their safe haven becomes a place of death . . .

Lori Rader-Day is the author of Death at Greenway, The Lucky One, Under a Dark Sky, The Day I Died, Little Pretty Things, and The Black Hour. She is a three-time Mary Higgins Clark Award nominee, winning the award in 2016. Lori lives in Chicago.

"Irresistible... a Golden Age homage, an elegantly constructed mystery that on every page reinforces the message that everyone counts." — New York Times Book Review

“Chicago author Lori Rader-Day pays a fictional tribute to Christie in Death at Greenway, a suitably suspenseful novel in which World War II nurses tend to London-evacuated children at the absent mystery writer’s holiday home; the owner’s occupation takes on added significance when the corpse of a murder victim is found on a nearby beach.”
— Wall Street Journal

"Richly nuanced mystery . . . Rader-Day nicely evokes the isolation and dislocations of people in WWII Britain while revealing her characters’ complexities. Despite the many allusions to Christie’s life and work, she eschews an artificially neat conclusion. Fans of both Christie and Rader-Day will relish this." — Publishers Weekly (starred review) on Death at Greenway

“A gorgeous evocation of World War II England, a moving investigation of love and hope under trial, a twisty murder mystery that would have satisfied Dame Agatha herself—all proof that Lori Rader-Day’s gifts translate to all eras. What a delicious book.”
— Louis Bayard, author of The Pale Blue Eye and Courting Mr. Lincoln

“Death at Greenway by Lori Rader-Day is an immersive, expansive WWII tale of murder and revenge. Set at Agatha Christie’s real-life country home, disgraced nurse-in-training, Bridey Kelly, is tasked to help care for a group of children seeking safety from war-torn London. Still, danger is everywhere and with unseen evil lurking, Bridey has to navigate a mysterious web of lies. Well-crafted and multi-layered, Death at Greenway is a vivid portrait of a woman trying to outrun her past in hopes of finding her place in a broken world.”
— Heather Gudenkauf, New York Times bestselling author of This is How I Lied

"Death at Greenway is a book Lori Rader-Day was born to write. The characters are deeply moving, the suspense and World War II research are impeccable. The language, as is always the case with Rader-Day, is beautiful, but in Greenway, she shows her suppleness: her pitch-perfect dialogue brings England in the Blitz to life." — Sara Paretsky, New York Times bestselling author of Dead Land, on Death at Greenway

“One of crime fiction’s strongest and most compelling voices.” — Alex Segura, acclaimed author of Blackout and Dangerous Ends

"Elegant and atmospheric . . . A clever take on the historical thriller." — CrimeReads, The Best Historical Fiction of 2021

“Dark, inventive and complex, the novel transcends simple whodunit status as Rader–Day focuses as much on the fears, deprivations, losses and uncertainties of war as she does on mystery.... Inspired by yesteryear but enriched by Rader–Day’s talent, Death at Greenway showcases a superior example of historical crime fiction.” — Free-Lance Star (Fredericksburg, VA)

“Complex characters, a rich sense of the effect of WWII on British citizens, and the constant threat of danger… Death at Greenway does justice to Christie’s oeuvre.” — South Florida Sun-Sentinel

“An intriguing mix of history and mystery.”
— Chicago Tribune

"Rader-Day, known for masterfully weaving historical elements into her female-focused literary thrillers, imbues this wartime whodunit with palpable emotion as Bridey reconciles her family’s bombing deaths through a plan to save another life." — Booklist

“Far from a cozy mystery, Death at Greenway is as taut as a bow string, with every character capable of snapping at a moment’s notice.”
— BookPage

“This puzzle box of a novel has everything, death at a distance on the battlefields and in hospitals, murder up close happening around Greenway House, a group of people that do not belong in the country, a crowd of those who will never leave the area. Readers will enjoy this novel down to the last page because when you find a well-layered entertaining enigma like “Death at Greenway,” it’s time to brew a cuppa and settle in for a treat.” — New City Lit

“Riveting…The novel evokes Christie’s style, complex plots, and atmosphere, but with impressive updates in terms of intimate relationships and psychology…Readers of historical novels will love the mix of history and fiction, admiring the way facts are easily feathered into the flow of the story. Highly recommended.”  — Historical Novels Review

“This book is powerful in subtle ways. The author lays in clues in such a way that even the mistress of misdirection, Agatha Christie, would be proud. If you are a fan of Christie, or just of historical fiction, place this book on your to-read list.” — Reviewing the Evidence

“Rader-Day accomplishes something special here. Death at Greenway is neither a Christie pastiche nor a gimmick, and no character is a type, a pitfall in historical fiction. Each one is drawn with delicacy and care, and though the author did her research, it’s been organically synthesized into the novel.” — Air Mail

“Rader-Day creates deeply believable, empathetic characters and puts the power in the hands of women.” — Publishers Weekly on The Lucky One

"The Lucky One promises to be another signature Lori Rader-Day blend of psychology, suspense, and noir." — CrimeReads on The Lucky One