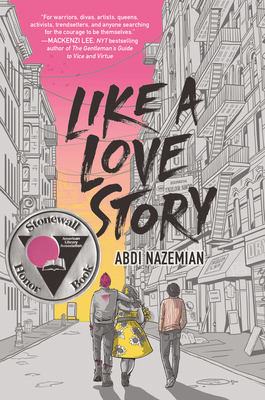 “Like a Love Story broke me and fixed me at the same time. Set in New York City in 1989, it chronicles the lives of three teens as they navigate the AIDS crisis. Abdi Nazemian captures perfectly what it felt like to be both excited and repelled by the thought of finding other gay kids to share experiences with, as well as the constant fear of wondering if AIDS was inevitable for all young gay men. I finished Like a Love Story with tears streaming down my face; they were tears of recognition to see myself so accurately reflected on the pages of a book.”
— John McDougall, Murder By the Book, Houston, TX

"A book for warriors, divas, artists, queens, individuals, activists, trend setters, and anyone searching for the courage to be themselves.”—Mackenzi Lee, New York Times bestselling author of The Gentleman’s Guide to Vice and Virtue

It’s 1989 in New York City, and for three teens, the world is changing.

Reza is an Iranian boy who has just moved to the city with his mother to live with his stepfather and stepbrother. He’s terrified that someone will guess the truth he can barely acknowledge about himself. Reza knows he’s gay, but all he knows of gay life are the media’s images of men dying of AIDS.

Judy is an aspiring fashion designer who worships her uncle Stephen, a gay man with AIDS who devotes his time to activism as a member of ACT UP. Judy has never imagined finding romance...until she falls for Reza and they start dating.

Art is Judy’s best friend, their school’s only out and proud teen. He’ll never be who his conservative parents want him to be, so he rebels by documenting the AIDS crisis through his photographs.

As Reza and Art grow closer, Reza struggles to find a way out of his deception that won’t break Judy’s heart—and destroy the most meaningful friendship he’s ever known.

This is a bighearted, sprawling epic about friendship and love and the revolutionary act of living life to the fullest in the face of impossible odds.

Abdi Nazemian is the author of Like a Love Story, a Stonewall Honor Book, and The Authentics. His novel The Walk-In Closet won the Lambda Literary Award for LGBT Debut Fiction. His screenwriting credits include the films The Artist’s Wife, The Quiet, and Menendez: Blood Brothers and the television series The Village and Almost Family. He has been an executive producer and associate producer on numerous films, including Call Me by Your Name, Little Woods, and The House of Tomorrow. He lives in Los Angeles with his husband, their two children, and their dog, Disco. Find him online at www.abdaddy.com.

“Nazemian paints a picture of late ‘80s queer life in New York City that’s neither romanticized nor viewed as only tragic…. [His] latest will remind readers that first love is isolating and unifying, exhilarating and terrifying, and every paradox in between.” — ALA Booklist (starred review)

“Three characters discover their inner truths at a time that sometimes feels apocalyptic for their community and loved ones…. The intense and nuanced emotions evoked by the characters’ journeys help to give this powerful novel by Nazemian a timeless relevance.” — Publishers Weekly (starred review)

“At the height of the 1980s AIDS crisis, three teens grapple with love and friendship…. [A] truly lovely romance to cherish. Deeply moving.” — Kirkus Reviews

“A book for warriors, divas, artists, queens, individuals, activists, trend setters, and anyone searching for the courage to be themselves.” — Mackenzi Lee, New York Times bestselling author of The Gentleman’s Guide to Vice and Virtue

“Like a Love Story is a fresh and poignant narrative about friends, family, friends who become family, and a society that is not always compassionate to those who need it most. I love this book with my entire heart. What a gift Abdi Nazemian has given us.” — Brandy Colbert, author of Stonewall Award winner Little & Lion

“A gorgeous, heart-wrenching book that explores love, loss, and forgiveness in all of their many forms. Abdi Nazemian deftly shows how we can only move forward by examining and embracing the past, and how anger and injustice can pave the way for a better and more hopeful future.”
— Robin Benway, National Book Award–winning author of Far from the Tree

“Like a Love Story brought me right back to the scene of my teen years... and it did so masterfully. This book made me sob, it made me laugh, it broke my heart and put it back together again. I absolutely loved it.” — Bill Konigsberg, Award-Winning Author of The Music of What Happens

Praise for THE AUTHENTICS: “As with the novels of Benjamin Alire Saenz or Randa Abdel-Fattah, Daria’s thought-provoking journey will resonate with teen readers of all backgrounds.” — Booklist (starred review)

Praise for THE AUTHENTICS: “The ferociously authentic Daria is a memorable protagonist.” — Kirkus Reviews (starred review)

Praise for THE AUTHENTICS: “A beautiful and compelling story about identity, race, and family love. A must read in an age where #weneeddiversebooks more than ever.” — Melissa de la Cruz, New York Times bestselling author

Praise for THE AUTHENTICS: “A charming and touching examination of everything that makes us who we are.” — Adi Alsaid, author of Let’s Get Lost and Never Always Sometimes

Praise for THE AUTHENTICS: “Will resonate with readers who have felt like they don’t know where they belong or who they want to be, and certainly with the children of immigrants who feel caught between worlds.” — Publishers Weekly

Praise for THE AUTHENTICS: “Surprisingly powerful…will appeal to any reader searching for identity and belonging, particularly those whose lives include two different cultures.” — Voice of Youth Advocates (VOYA)