The Life Below (Paperback) 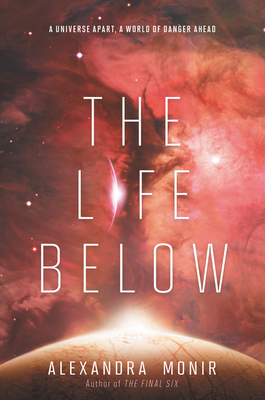 Perfect for fans of The Illuminae Files and The 100, in this heart-racing sequel to The Final Six the teen astronauts must figure out the truth about Europa before it’s too late.

It was hard enough for Naomi to leave Leo, a fellow Final Six contestant, behind on a dying Earth. Now she doesn’t know who to trust.

The International Space Training Camp continues to dodge every question about its past failed mission, and Naomi is suspicious that not everything is as it seems on her own mission to Europa. With just one shot at Jupiter’s moon, Naomi is determined to find out if there is dangerous alien life on Europa before she and her crew get there.

Leo, back on Earth, has been working with renegade scientist Dr. Greta Wagner, who promises to fly him to space where he can dock with Naomi’s ship. And if Wagner’s hypothesis is right, it isn’t a possibility of coming in contact with extraterrestrial life on Europa—it’s a definite, and it’s up to Leo to find and warn Naomi and the crew.

With questions piling up, everything gets more dangerous the closer that the mission gets to Europa. A storm threatens to interfere with Leo’s takeoff, a deadly entity makes itself known to the Final Six, and all questions the ISTC has been avoiding about the previous mission get answered in a terrifying way.

If the dream was to establish a new world for humans on Europa…the Final Six are about to enter a nightmare.

Alexandra Monir is an Iranian-American author and recording artist. She is the author of the hit novel The Final Six as well as four other published young adult novels, including the bestselling time-travel romance Timeless. She currently resides in Los Angeles, California. To learn more about Alexandra, visit her online at www.alexandramonir.com.

“Fast-paced and plot-driven.” — Bulletin of the Center for Children’s Books

“A breathtakingly real look at love, loss, and the dangers of space, THE FINAL SIX skyrockets into twists and turns I never saw coming!”  — Beth Revis, NYT bestselling author of Across the Universe series

“I sat down to read a bit before bed and then it was two a.m. and the book was half gone. This is a space competition of epic proportions, loaded with disturbing hidden secrets and intense action. Your eyes will be glued to the page.”   — Kendare Blake, #1 NYT bestselling author of Three Dark Crowns

“An ingenious thrill ride of a novel with memorable, diverse characters, The Final Six is a five-star read.” — Alyson Noel, #1 New York Times bestselling author of The Immortals series

“A stunning new take on the dystopian novel.” — Paperback Paris

“This novel is YA sci-fi grounded in a very plausible, only-just-in-the-future version of our world, with two relatable, compelling MCs and a relentless thriller pace. Read it!” — Barnes & Noble Teen Blog