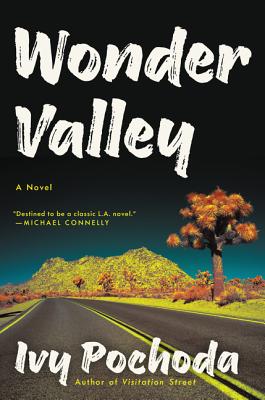 By Ivy Pochoda
$26.99
Ships from our supplier - you choose to your home or to the store

“A man running naked among the gridlocked cars of an L.A. freeway is the catalyst for this dark tale set in the rough neighborhoods of a decidedly unglamorous Los Angeles. In this version of the city, it's not only the poor and the powerless who are desperate; even the better-off characters turn out to be broken sinners who crave hope and redemption. The gritty beauty of Pochoda's writing, whether about cruelty and violence or about love, no matter how desperate, pulled me into the characters' lives and compelled me to keep reading all night.”
— Francesca De Stefano, Books Inc., San Francisco, CA

Refinery29 Best Book of the Year

“Destined to be a classic L.A. novel.”—Michael Connelly

When a teen runs away from his father’s mysterious commune, he sets in motion a domino effect that will connect six characters desperate for hope and love, set across the sun-bleached canvas of Los Angeles.

From the acclaimed author of Visitation Street, a visionary portrait of contemporary Los Angeles in all its facets, from the Mojave Desert to the Pacific, from the 110 to Skid Row.

During a typically crowded morning commute, a naked runner is dodging between the stalled cars.  The strange sight makes the local news and captures the imaginations of a stunning cast of misfits and lost souls.

There's Ren, just out of juvie, who travels to LA in search of his mother. There's Owen and James, teenage twins who live in a desert commune, where their father, a self-proclaimed healer, holds a powerful sway over his disciples. There's Britt, who shows up at the commune harboring a dark secret. There's Tony, a bored and unhappy lawyer who is inspired by the runner. And there's Blake, a drifter hiding in the desert, doing his best to fight off his most violent instincts.  Their lives will all intertwine and come crashing together in a shocking way, one that could only happen in this enchanting, dangerous city.

Wonder Valley is a swirling mix of angst, violence, heartache, and yearning—a masterpiece by a writer on the rise.

Ivy Pochoda is the author of The Art of Disappearing, Visitation Street, and Wonder Valley, a Los Angeles Times Book Prize finalist and winner of the Strand Critics Award. She lives in Los Angeles.

“A dizzying, kaleidoscopic thriller that refuses to let readers look away from the dark side of Southern California. . . . Impossible to put down. . . . It’s the memorable characters and beautiful prose that make the novel so successful. . . . Unexpected and pitch-perfect.”
— Los Angeles Times

“Audacious. . . . Each character is realized with vivid empathy. . . . A richly Californian novel, drenched in enough sunlight to illuminate the harshest of truths.”
— Entertainment Weekly

“Enthralling. . . . A compassionate look at the displaced that treats each with respect and humanity.”
— Associated Press

“Pochoda’s steady hand and sharp eye keep all of her characters moving swiftly and gracefully through the variegated L.A. landscape.”
— LitHub

“Pochoda is a masterful storyteller. . . . [She’s] come up with a harmonious narrative that showcases the human condition, full of ecstasy, angst, rage, and beauty.”
— Nylon Magazine

“Pochoda is a master. . . . It’s not a far stretch to consider Pochoda to be in company of James Ellroy, Michael Connelly and T. Jefferson Parker. . . . It wouldn’t be a big surprise to find Wonder Valley on the short list for several awards.”
— BookPage

“Pochoda has written a novel alive with empathy for the dispossessed and detailed description of the California landscape.”
— Publishers Weekly

“Ambitious, absorbing. . . . Pochoda paints southern California with a vibrant brush, rendering an evocative landscape on which her desperate characters seek out redemption and rejuvenation.”
— Booklist

“Wonder Valley seethes with the vivid, searching idea of southern California. But as the intersecting journeys of hippie acolytes, restless hoods, lost boys and all manner of runaways converge, Pochoda enacts an aching dream of home that will possess and haunt you.”
— Smith Henderson, author of Fourth of July Creek

“Wonder Valley is destined to be a classic L.A. novel. From desert scrub to cold blue sea, it carries an eloquent yet hard-edge take on the contradictions of a place so difficult to define. It’s impossible to put down.”
— Michael Connelly, author of The Wrong Side of Goodbye

“A vision of Southern California that is at once panoramic and intimate. . . . This novel paints an unforgettable portrait of people who long, above all else, for community and connection.”
— Edan Lepucki, author of California