Each Night Was Illuminated (Hardcover) 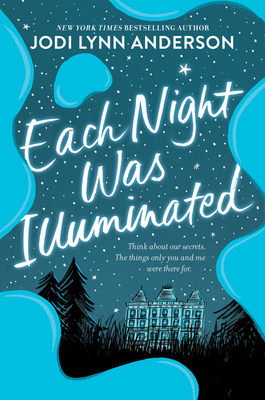 With writing that sparks off the page, New York Times bestselling author Jodi Lynn Anderson tells a story of saints and floods, secrets and truths, rage and love—and the bravery it takes to bet your whole life on a new kind of hope.

The day the train fell in the lake, Cassie stopped believing in much of anything, despite growing up in a devout Catholic family. Then she set her mind to forgetting the strange boy named Elias who was with her when it happened.

When Elias comes back to town after many years away, Cassie finds herself talked into sneaking out at night to follow him ghost-hunting—though she knows better than to believe they will find any spirits.

Still, the more time she spends with Elias—with his questions, his rebelliousness, his imagination that is so much bigger than the box she has made for herself—the more Cassie thinks that even in a world that seems broken beyond repair, there just may be something worth believing in.

An unmissable novel for fans of Nina LaCour and Jandy Nelson!

Jodi Lynn Anderson is the New York Times bestselling author of Peaches, Tiger Lily, and the popular May Bird trilogy. She lives in Asheville, N.C., with her husband, her son, and an endless parade of stray pets.

"With searing prose, Anderson lays bare Cassie's heart, documenting one girl's growing understanding of the fragility of the world and calculating as she does the equal dangers of living in it and of failing to. Tender and wise." — Booklist (starred review)

"Religious imagery sits beside cinematic descriptions of environmental tragedies, and readers are left to consider the unsolvable tension between faith and fatalism, and whether the fight for spiritual salvation is worth anything in a dying world." — Bulletin of the Center for Children’s Books (starred review)

"Cassie’s despair, rage, and courage in the face of seeming hopelessness are lyrically chronicled in quiet prose... A thoughtful read about grappling with faith while learning to take a stand." — Kirkus Reviews