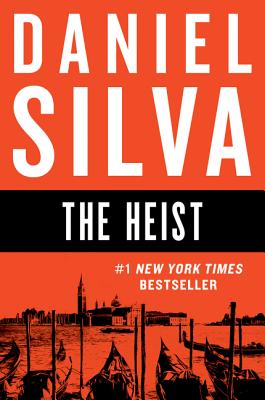 This is book number 14 in the Gabriel Allon series.

L egendary spy and art restorer Gabriel Allon is in Venice repairing an altarpiece when he receives an urgent summons from the Italian police. The art dealer Julian Isherwood has stumbled upon a murder scene in Lake Como, and he’s being held as a suspect. To save his friend, Gabriel must perform one simple task: find the most famous missing painting in the world.

Sometimes the best way to find a stolen masterpiece is to steal another one. . . .

The dead man is a fallen spy with a secret: he had been trafficking in stolen artworks and selling them to a mysterious collector. Among those paintings is the world’s most iconic missing masterpiece: Caravaggio’s Nativity with St. Francis and St. Lawrence.

Gabriel embarks on a daring gambit to recover the Caravaggio that will take him on an exhilarating hunt—from Marseilles and Corsica to Paris and Geneva, and, finally, to a small private bank in Austria, where a dangerous man stands guard over the ill-gotten wealth of one of the world’s most brutal dictators. . . .

“The Heist by Silva is nothing short of phenomenal. It is his best work to date. And that is a huge statement since each novel has been unique and marvelous.” — Naples Daily News

“The story is a twisting tale of moves and countermoves, and even if this is your introduction to Gabriel Allon, you’ll find the characters in the book come to life.” — Oklahoma City Oklahoman

“Silva has weaved together a story with intrigue, insight, and suspense.” — Crimespree Magazine

“Magnificent….This book has all the elements you love about Silva’s writing—his way with a plot, his incomparable characters, and the range of emotions he piles into his pages.” — Huffington Post

“Smart, unpredictable, and packed with bits of history, art, heart, and imagination, this is a page turner to be savored….When it comes to the vast club of practitioners of international spycraft, Silva is a cut above them all, and The English Girl is a masterwork.” — Neal Thompson, Amazon.com on The English Girl

“Although Gabriel’s adventures are set in the real world of greedy politicians and grabs for control of a diminishing supply of natural resources, ‘Israel’s avenging angel’ has the superhuman abilities that make for a satisfying fantasy.” — Columbus Dispatch on The English Girl

“Allon is a great political operative, but Silva is an even greater writer. That is what makes THE ENGLISH GIRL a must read.” — Huffington Post on The English Girl