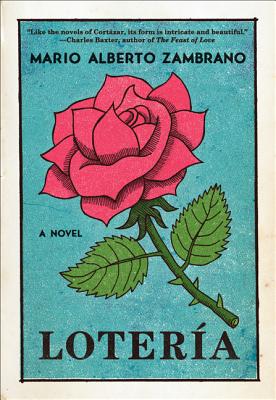 By Mario Alberto Zambrano
$14.99
Email or call for price.

“A taut, fraught, look at tragedy, its aftermath, and the stories we tell ourselves to survive. With suspense, dread, and always the possibility for redemption, we watch as Zambrano flips the cards of chance and fate.” — Justin Torres, author of We The Animals

In Lotería, the spellbinding literary debut by Mario Alberto Zambrano, a young girl tells the story of her family’s tragic demise using a deck of cards of the eponymous Latin American game of chance.

With her older sister Estrella in the ICU and her father in jail, eleven-year-old Luz Castillo has been taken into the custody of the state. Alone in her room, she retreats behind a wall of silence, writing in her journal and shuffling through a deck of lotería cards. Each of the cards’ colorful images—mermaids, bottles, spiders, death, and stars—sparks a random memory.

Pieced together, these snapshots bring into focus the joy and pain of the young girl’s life, and the events that led to her present situation. But just as the story becomes clear, a breathtaking twist changes everything.

By turns affecting and inspiring, Lotería is a powerful novel that reminds us of the importance of remembering, even when we are trying to forget.

Beautiful images of lotería cards are featured throughout this intricate and haunting novel.

Mario Alberto Zambrano published his debut novel Lotería in 2013 with Harper. He’s the recipient of a Presidential Scholar Award, Princess Grace Award, NEA Fellowship in Literature, Alice Hoffman Prize for Fiction, along with multiple residencies across the globe including Hawthornden Castle in Scotland, England. He has served as Lecturer in Theater, Dance & Media at Harvard University and is currently the Associate Director of Dance at The Juilliard School.

“Loteria is a taut, fraught, look at tragedy, its aftermath, and the stories we tell ourselves to survive. With suspense, dread, and always the possibility for redemption, we watch as Zambrano flips the cards of chance and fate.” — Justin Torres, author of We The Animals

“Loteria…captures, from a wide-eyed yet uncloying child’s perspective, the way in which life can feel a lot like a game of chance.” — Vogue, "Summer Reads"

“Loteria… is constructed as a beautiful, gripping, and lyrical set of riddles (asked and solved) about life—and—death matters in one family. Like the novels of Cortazar, its form is intricate and beautiful. ” — Charles Baxter, author of Gryphon: New and Selected Stories and The Feast of Love

“Mario Alberto Zambrano performs a lyrical and formal sleight of hand conjuring a spiritually profound and deeply moving story. Loteria is about everything that matters. . . . This gorgeous, one-of-a-kind debut, marks the emergence of a singular and powerful new literary voice.” — Amber Dermont, New York Times bestselling author of The Starboard Sea and Damage Control: Stories

“In a bold, deeply-felt debut Mario Alberto Zambrano brings us tragedy made powerful … These are people who hold on to each other so hard it hurts. And this moving novel will hug you too, every bit as tight.” — Josh Weil, author of The New Valley

“Take the architecture of Italo Calvino’s The Castle of Crossed Destinies and marry it to the wide-open childhood receptivity of Carson McCullers’s The Member of the Wedding, and you might achieve something like the effect of Loteria, but the tone Mario Alberto Zambrano strikes here is entirely his own. Luz, the book’s young narrator, is at once rueful and playful, innocent and canny, with the true breath of life about her, and when she finally lays the last of her cards before you, you’ll feel that you know her as well as you do your own family.” — Kevin Brockmeier, author of The Brief History of the Dead

“If a book can be a spirit, this one is lithe, beautiful, and true. Mario Alberto Zambrano brings the heart of an artist immersed in movement and music to his prose and the result is dazzling.” — Ru Freeman, author of A Disobedient Girl

“Loteria, charms on every page, despite heartache, love and loss. . . . The beauty and joy of her voice overcomes the hardships of her life, and by the end we have fallen in love. Bravo to a marvelous debut!” — Andrew Sean Greer, author of The Confessions of Max Tivoli

“Mario Alberto Zambrano’s Loteria is a tender, beautifully written story. In every line, Zambrano finds the happy and sad music of childhood. It is an entrancing work.” — Lynne Tillman, author of Someday This Will Be Funny

“Lotería is the card-based Mexican variant of bingo and, in the hands of Zambrano, it’s a deck stacked with narrative possibilities. . . . An intriguing debut and an elegiac, miniature entry in the literature of Latin American diaspora that will break your heart.” — Publishers Weekly (starred review)

“This is a gripping, heartbreaking novel by a new writer who already understands the power of understatement and controlled revelation.” — El Paso Times

“Loteria is… like stumbling onto the gut-wrenching journal of a preteen girl. It’s imaginative, mysterious, and sometimes too real.” — Daily Candy

"Loteria reaches a rare plane where it transcends its form and comes alive as a commentary on character, family and culture.” — Brooklyn Rail

“Luz’s (and by extension Zambrano’s) refusal to give in to easy condemnations of her father’s actions, beautifully highlighted by genuinely difficult arguments between Luz and Estrella, is among this novel’s most risky and ultimately successful gambits.” — School Library Journal (starred review)