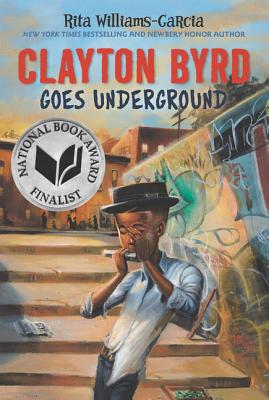 From beloved Newbery Honor winner and three-time Coretta Scott King Award winner Rita Williams-Garcia comes a powerful and heartfelt novel about loss, family, and love that will appeal to fans of Jason Reynolds and Kwame Alexander.

Clayton feels most alive when he’s with his grandfather, Cool Papa Byrd, and the band of Bluesmen—he can’t wait to join them, just as soon as he has a blues song of his own. But then the unthinkable happens. Cool Papa Byrd dies, and Clayton’s mother forbids Clayton from playing the blues. And Clayton knows that’s no way to live.

Armed with his grandfather’s brown porkpie hat and his harmonica, he runs away from home in search of the Bluesmen, hoping he can join them on the road. But on the journey that takes him through the New York City subways and to Washington Square Park, Clayton learns some things that surprise him.

Rita Williams-Garcia's Newbery Honor Book, One Crazy Summer, was a winner of the Coretta Scott King Author Award, a National Book Award finalist, the recipient of the Scott O’Dell Award for Historical Fiction, and a New York Times bestseller. The two sequels, P.S. Be Eleven and Gone Crazy in Alabama, were both Coretta Scott King Author Award winners and ALA Notable Children’s Books. Her novel Clayton Byrd Goes Underground was a National Book Award finalist and winner of the NAACP Image Award for Youth/Teen Literature. Rita is also the author of five other distinguished novels for young adults: Jumped, a National Book Award finalist; No Laughter Here, Every Time a Rainbow Dies (a Publishers Weekly Best Children’s Book), Fast Talk on a Slow Track (all ALA Best Books for Young Adults); and Blue Tights. Rita Williams-Garcia lives in Jamaica, New York, with her husband and has two adult daughters. You can visit her online at www.ritawg.com.

Frank Morrison is the award-winning illustrator of many books for young readers, including Jazzy Miz Mozetta by Brenda C. Roberts, winner of the Coretta Scott King/John Steptoe Award for New Talent; Katheryn Russell-Brown's Little Melba and Her Big Trombone, a Coretta Scott King Illustrator Honor book; and Gene Barretta's Muhammad Ali. Before becoming a children's book illustrator and fine artist, Morrison toured the globe as a break-dancer. He lives in Georgia with his family. You can visit him online at www.morrisongraphics.com.

★ “Clayton’s love of his grandfather and his music is wonderfully drawn, as is his grief when he loses them.... Strong characterizations and vivid musical scenes add layers to this warm family story.” — Kirkus Reviews (starred review)

★ “With the precision of a surgeon, Williams-Garcia lifts and examines layers of Clayton’s hurt and anger: the loss, but also the inability of his dismissive mother to understand... The book’s through line, though, is the music, and Garcia-Williams skillfully finds melody in words.” — Booklist (starred review)

★ “This slim novel strikes a strong chord... [A] holistic portrait of a family in pain, a realistic portrait of grief and reconciliation, and a reminder that sadness and loss are wrapped up in the blues.” — Publishers Weekly (starred review)

★ “An appealing, realistic story with frequent elegant turns of phrase. The third-person voice helps to keep Clayton’s story from becoming self-absorbed, as he learns to navigate the literal and figurative underworld and then find his way back to the everyday world of family, friends, and school.” — Horn Book (starred review)

★ “Williams-Garcia packs a lot of story in this slim book... This complex tale of family and forgiveness has heart.” — School Library Journal (starred review)

“Set to the low-down howl of the blues and cool thump of hip-hop, this story is so full of heart and soul it boogies right off the page. Read it right now!” — Daniel José Older, author of Shapeshifter

“Williams-Garcia writes with keen sympathy about a boy who lost the key adult figure in his life and his rage at his mother’s making the loss worse.” — Bulletin of the Center for Children’s Books

“Fans of Jason Reynolds and Kwame Alexander will find comfort in the portrayal of Clayton and his struggle to become a young man...Williams-Garcia shows us once again that the only answer is to lean into [our] burdens, name them, and bend them into our own score.” — Meg Medina, writing in the New York Times Book Review

“This lovely novel, poignant as a blues song, explores a child’s experience of profound grief, and how lonely that can be when adults don’t comprehend the enormity of the loss.” — Buffalo News