The Novice: A Story of True Love (Paperback) 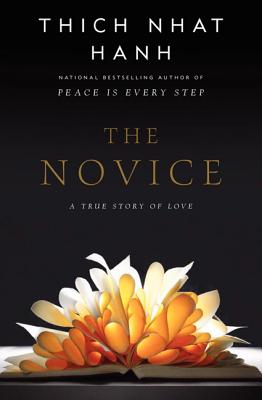 Fans of Thich Nhat Hanh’s Peace is Every Step and Anger, and Deepak Chopra’s Buddha, will appreciate Hanh’s wisdom and storytelling in his novel The Novice, which contains universal themes that transcend all boundaries of faith, creed, country, and era.

Through the parable of a young woman who stays true to herself and her faith in the face of adversity, Vietnamese Zen Buddhist master and peace activist Thich Nhat Hanh enables readers to embark on their own path of introspection and self-discovery.

With his trademark insight, Hanh presents a path to greater awareness of the means to manifest peace both inside oneself and in the world at large.

Thich Nhat Hanh was a world-renowned Buddhist Zen master, poet, author, scholar, and activist for social change, who was nominated for the Nobel Peace Prize by Dr. Martin Luther King Jr. He was the author of many bestselling books, including the classics Peace Is Every Step and The Art of Living. Through his books and retreats at the monasteries he has founded in the U.S., Europe, Asia, and Australia, he became a pre-eminent figure in contemporary Buddhism, offering teachings that are both deeply rooted in ancient wisdom and accessible to all.

“Thich Nhat Hanh shows us the connection between personal, inner peace and peace on earth.” — His Holiness the Dalai Lama

“Thich Nhat Hanh is a holy man, for he is humble and devout. He is a scholar of immense intellectual capacity. His ideas for peace, if applied, would build a monument to ecumenism, to world brotherhood, to humanity.” — Martin Luther King, Jr., in nominating Thich Nhat Hanh for the Nobel Peace Prize

“Thich Nhat Hanh writes with the voice of the Buddha.” — Sogyal Rinpoche, author of The Tibetan Book of Living and Dying

“Thich Nhat Hanh is more my borther than many who are nearer to me in race and nationality, because he and I see the exact same way.” — Thomas Merton

“Among Buddhist leaders influential in the West, Thich Nhat Hanh ranks second only to the Dalai Lama.” — New York Times

“One of our most treasured spiritual teachers tells a story that will touch your heart. So beautiful.” — Marianne Williamson, author of A Return to Love

“Thich Nhat Hanh has given us a luminous book. The Novice is both instructive and haunting. Its heroine holds a lantern for all seekers.” — Julia Cameron, author of The Artist’s Way