American Values: Lessons I Learned from My Family (Paperback) 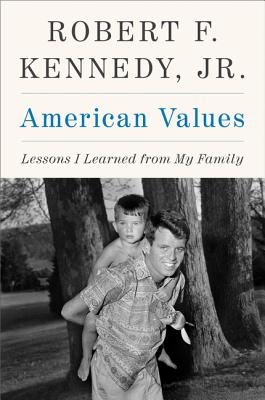 Now in paperback: RFK Jr. describes his life growing up Kennedy in a tumultuous time in history that eerily echoes the issues of nuclear confrontation, religion, race, and inequality that we confront today.

In this powerful book that combines the best aspects of memoir and political history, the third child of Attorney General Robert Kennedy and nephew of JFK takes us on an intimate journey through his life, including watershed moments in the history of our nation. Stories of his grandparents Joseph and Rose set the stage for their nine remarkable children, among them three U.S. senators—Teddy, Bobby, and Jack—one of whom went on to become attorney general, and the other, the president of the United States.

We meet Allen Dulles and J. Edgar Hoover, two men whose agencies posed the principal threats to American democracy and values. Their power struggles with the Kennedys underpinned all the defining conflicts of the era. We live through the Cuban Missile Crisis, when insubordinate spies and belligerent generals in the Pentagon and Moscow brought the world to the cliff edge of nuclear war. At Hickory Hill in Virginia, where RFK Jr. grew up, we encounter the celebrities who gathered at the second most famous address in Washington, members of what would later become known as America’s Camelot. Through his father’s role as attorney general we get an insider’s look as growing tensions over civil rights led to pitched battles in the streets and 16,000 federal troops were called in to enforce desegregation at Ole Miss. We see growing pressure to fight wars in Southeast Asia to stop communism. We relive the assassination of JFK, RFK’s run for the presidency that was cut short by his own death, and the aftermath of those murders on the Kennedy family.

These pages come vividly to life with intimate stories of RFK Jr.’s own experiences, not just with historical events and the movers who shaped them but also with his mother and father, with his own struggles with addiction, and with the ways he eventually made peace with both his Kennedy legacy and his own demons. The result is a lyrically written book that is remarkably stirring and relevant, providing insight, hope, and steady wisdom for Americans as they wrestle, as never before, with questions about America’s role in history and the world and what it means to be American.

Robert F Kennedy, Jr., an environmental attorney and activist, is the president of Waterkeeper Alliance. He is the author of numerous books, including Crimes Against Nature and The Riverkeepers. His writing has appeared in the New York Times, the Atlantic, the Wall Street Journal, and the Washington Post, among other publications.

“With emotion and striking detail, RFK Jr. recalls both the private joys and very public pain of his childhood.” — Independent Catholic News